To Henderson and back; a fairy tale

The old lady, “Bounty Bay”, is in dyer need of retirement or at least having a complete overhaul by a skilled ship plastic surgeon.
On our way back to Pitcairn, having paid a visit to Henderson Island, she showed us some more of her problems.
Jack our wonder mechanic already had declared our bilge pumps dead, so every 6 hours when he checked the engines he spend 5 minutes pumping up water out of the engine rooms by hand.
Next to this “minor" problem the lights on the dashboard went out, so now when I have my night watch I need to use a torch to read the gages. And this morning it turned out that our VHF-radio was not working, but finally Super Jack got it fixed, again.
Apart from those “little” problems the trip back to Pitcairn was very uneventful. Weather was calm, although in the early evening a weather front looking like the Poseidon Adventure tidal wave promised no good, but we arrived back in Pitcairn at 12.30 hours without a problem. 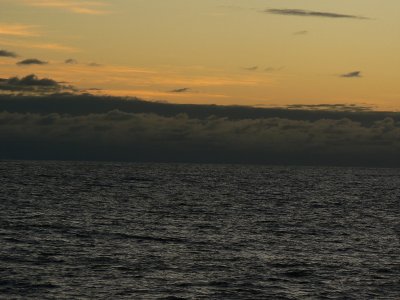 At 16.00 hours all our supplies where delivered together with some extra British luggage for Mangareva called Neil. I call him extra luggage because he is not very sociable; he hardly talks and only asks questions, small talk is strange to him. For example although he spent 10 weeks on Pitcairn, only on the last two days he packed our his brand new video camera and starts making pictures of the place where he’s been for 10 weeks. And this was only after one of us asked him if he made some nice films about Pitcairn. So we all think he is writing a book about Pitcairn after the bad publicity of last years, but he will not admit to that. Why we think that? Because he is married to a Taiwanese woman and was now returning home to Taiwan and while on Pitcairn he interviewed most of the population like he interviewed us. What girl lets her man go off for 10 weeks? Either he is a very lucky man or he is a writer.
The supplies consisted of fresh fruits and breadfruit harvested at the island. So on our way back to Mangareva via Temoe we can enjoy freshly picked banana, pineapple and passion fruit. They came in big supplies so the danger of scurvy will be lost on us.
We lifted anchor from Bounty Bay and set course for Temoe atoll and while we where leaving, big rainclouds began to surround the island and made Pitcairn Island disappear in a haze accompanied by a rainbow. 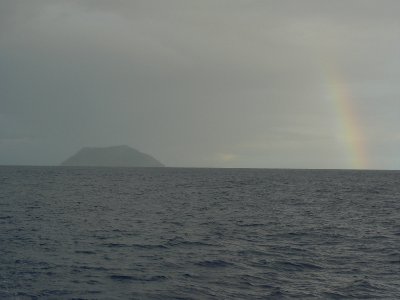 An ending for our adventure almost fitting for a fairy tale; like the pot of gold at the end of the rainbow. Is the island really there, does it really exist or had we all just experienced a wonderful dream? 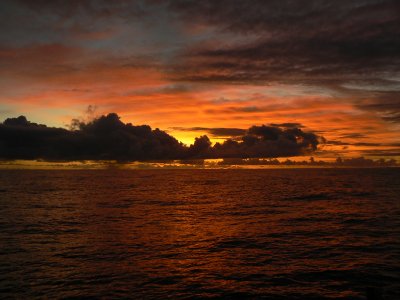 And as we headed off into the sunset with all shades of red, we sunk in our dreams of the last few weeks, thinking about our adventures and ready for new travels and adventures and being sure nothing ever will surpass these last weeks.