Yesterday I flew to Salalah from Muscat and it’s absolutely unbelievable what the locals bring with them. Except from the enormous bags; I saw, amongst other things, a big screen digital TV and a Keyboard.
The temperature had dropped 10 degrees Celsius, from a hot 39 in Muscat, to a very agreeable 29 degrees Celsius here in Salalah. Also the difference in landscape struck me, I new it would be greener here, but I hadn’t expected this. It’s a lot greener after the Monsoon than in Muscat, everything is blossoming.
What also struck me is that a lot of the women here wear facials masks and in Muscat hardly any woman wears one, maybe it’s because they’re more traditional here in the southwest of Oman. This morning I noticed a woman eating with the mask and they lift it up just enough to let the spoon reach the mouth, it must be very uncomfortable.
Today I went on my first tour to see Salalah. The first stop was the supposed tomb of Ishmael, the grandfather of Jesus. My first thought was that he must have been a very tall guy because it was 10-12 meters long, but my guide explained that it was so long because they didn’t know exactly where the head was so they covered “the whole 9 yards” :-)
After that remarkable visit we drove along the Garden Farms where there was an enormous display of fruits, dates and coconuts, all freshly picked from the trees and put up for sale at the stands next to the farms. The way they farm here is very ingenious, the highest plants are the coconut and date trees, then at the middle level you have the fruit trees and at ground level they grow the vegetables, in this way the vegetables aren’t burnt up by the sun.
We also made a stop at the Shanfari mosque, which is beautiful through the green colors and the interior designs. Hereafter we visited another holy place, namely the Camel Footprint. It’s believed that the Camel of the prophet Saleh was killed here by opponents of the prophet and his footprints were put in the rocks and his blood stained that same rock. Whether it is true or not, it’s a good story and if you see the rock it actually makes sense. After a drive along the Sultans summer palace and a visit to the new and old souq, where they sell lovely smelling crystals of frankincense, we drove to the archeological park. Here are the ruins of an old city which even Marco Polo made a note about. We were very lucky, because the new museum had just been opened yesterday and we were one of the first visitors there. The museum hasn’t been opened officially yet, off course I was very honored :-)
Well kids good night and more tomorrow or the day after, I’ll see when you deserve it. 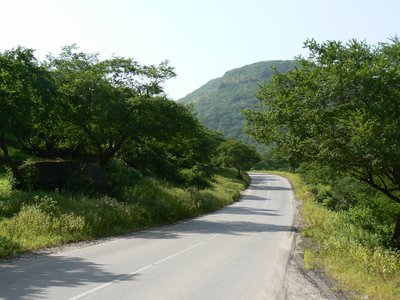