How many forts can one handle 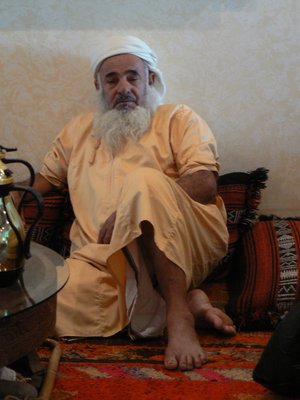 Today we toured around Nizwa, to begin with we visited the souq of Nizwa. Our visit yesterday was after all brutally interrupted by some raindrops. The souq's in Oman are nice, you’re not bothered by pushy merchants who want to sell you something. Only if you ask the price, negotiations begin. If you say yes to the price the merchant is asking, you will be hailed in his prayers and laughed about in talks with his friends. After this we paid a visit to wadi Tanuf, because of the rain of the last week the wadi was full of water and not dry which it is most of the year, this gives it just that little bit extra. The former town Tanuf was destroyed in 1957 by order of the father of Sultan Qaboos (the present Sultan of Oman). He asked the English for this destruction because a Madi had decided he wanted to be independent and started his own Madinat. Which didn’t fell well with the former Sultan, because he strived to a united Oman.
After a short visit to this destroyed and abandoned village we went to see yet another fort, the one in Bahla, this one’s on the UNESCO world heritage list and is presently closed for public because of the renovation. Most of the fort is already reconstructed; only one last part is still being worked on. This gives you a nice view on how rigorous reconstruction can be, because the color is quite off from the part that is already reconstructed and you can still see that the original fort was very much destroyed.
To top the day off we visited the palace at Jibreen. It looks like a fort but was really a palace and it’s the only palace in Oman. The great thing about it is that it has a lot of stuff in every room so you get an impression how simple live was in the 1700’s.
After this we had a long drive back to Muscat, but we made a coffee stop at the restaurant we ate the day before. Food is great and cheap in Oman, when you go to a restaurant, outside your hotel. For a meal of soup, main course and drinks you only pay 3 Oman Real, which comes down to about 6 Euro.
So now I’m back in Muscat and tomorrow we go into the dessert to ruff it up a bit and after that it’s off to Salalah on Saturday, where it must be very green and cool by now (25 C) at the end of the monsoon season.