so friendly and open 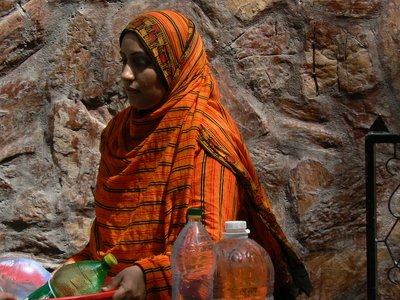 Yesterday we visited the Sultan Qaboos Grand Mosque, which is an impressive piece of architecture. The praying hall for men is very large and very beautiful. It is the only mosque in the land you can visit if you’re not a Muslim.
After this monumental visit we moved a bit more inland to Nakhal and Rustaq where we visited some of the many forts that are around in Oman, there should be over a 100 in Oman. Both forts are situated in an oasis and if you want a good view over the oasis you should climb the fort. Especially the one in Nakhal, because this one has artifacts of the people who used to inhabit these forts, the one in Rustaq is impressive just by the size of it and the many opportunities it gives you to take a wrong step and therefore a deep fall, so be careful here.
The Omani people are so very friendly, our guide talked to this one girl who was getting water and she told everything about herself. She is 23 was married at 16 and had four children, she was accompanied by her 8 year old brother and her 19 year old sister who just finished high school and wanted to do some more studying. Her marks weren’t good enough for University but she was looking for some other college. So it’s not that women have to get married right away produce some kids and be done with it, no in Oman over 50% of the students in University is female.
After only a short talk with out guide she invited us in her home, we declined as our group is 12 persons big and this would be to great an inconvenience, but still it shows how open and friendly the Omani people are, an other example was in a small village where we were standing and some woman came back from doing the dishes, our guide spoke to them and immediately they started a conversation with her as if they had known her for years. Also Omani men are very friendly, the only thing you have to know is respect, if you respect them in their customs they will respect you in yours. It’s a simple; well it would be if you spoke some Arabic :-).