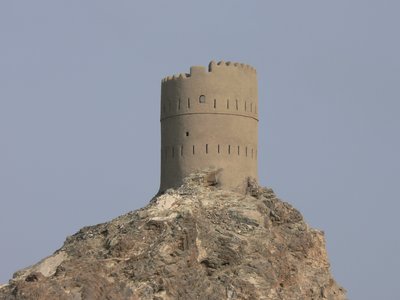 Yesterday evening I needed a pick-me-up, because I still had received no word about my luggage, I heard a lot of people cheering in the garden of the hotel, so I went over. Ordered a beer and found out I crashed the employee’s party, but they invited me to stay and I had a blast with very friendly people who came from a lot of different countries, Sri Lanka, India, Austria, Sweden, Holland and even Oman. The Sultan tries very hard to keep the expatriates limited to only 25% of the population of his country.
After many more beers it was time for some sleep and today I had my first excursion, a city trip in Muscat, we visited the museum and the palace of Sultan Qaboos, which was home by the way, because his flag was in top of the palace. The last stop of the day was at the souk in Muttrah.
Luckily my luggage has arrived today so I could put on some clean clothes, which is advisable here, because you sweat a lot. Which off course you compensate by drinking a lot of water so you can do some more sweating and so on and so on.

Amice, only one lost piece of luggage during a stopover in Heathrow, as all frequent travellers know, that ain't bad!
Knowing you plan to go diving later this trip, you probably are interested to hear about the fate of Crocodile Hunter (and Wacko Jacko imitator) Steve Irwin:

So have fun, but watch out for small kids, crocs and deadly fish! Gr FHa

Beer in an islamic country? I am deeply ashamed that you don't live by Sharia rules!
JUST KIDDING haha.
Enjoy and keep making nice pictures, maybe some will be featured, as there are almost no Oman pictures on travellerspoint!
Michael.