The last two days I have been walking around the island and had another party.
I’ve walked Pitcairn’s first Eco trail, this is a wonderful easy walk leading up to Christians cave. 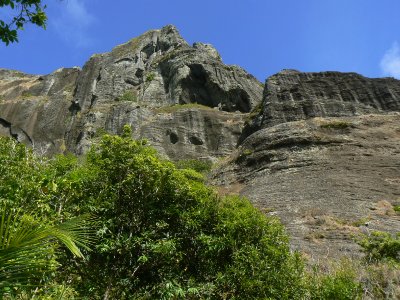 Along the route you’ll find plaques explaining you everything about the flora and fauna found on Pitcairn. It tells you about the endemic species and the species brought over by the first Polynesian settlers and offcourse the species brought over since the resettlement in 1790 by the Bounty mutineers.
The people I am staying with are mentioned on the plaques because Carol rediscovered a plant that was thought to be extinct, she saved it just in time before a landslide on Tedside destroyed the new found plant. Now it is replanted along the Eco trail and being kept in the greenery of endemic plants.
At the end of the Eco trail there is a last plaque warning you that if you wish to walk up further to Christians cave, you better remove all the prickly seeds before you come back down on to the trail and into Adamstown, because the vegetation upon the ridge is very harmful for other flora and will take its place and destroy it.
In the afternoon I went down to the Landing in Bounty Bay to take some pictures and there where some children, along with their parents to play in the landing dock. This is an ideal place for children to enjoy the ocean, because it is semi sheltered from the ocean and so if the seas aren’t to rough the swimming is good. Some of the children had surfing boards and they put them on the longboat ramp, took a sprint, jumped up their boards and surfed down the ramp into the water. 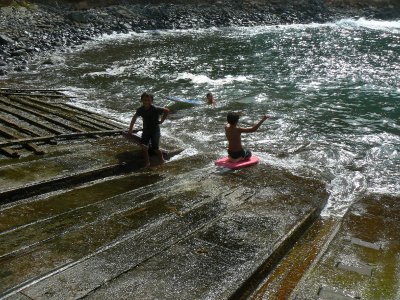 While I was there a few of the smaller boats came back from their fishing trip, one boat was from Christian’s café and it had a box full of Red Coral trout, all for the Friday evening dinner at the café. Also a boat came back with Paul and a friend, they had been spear fishing and caught some big fishes. 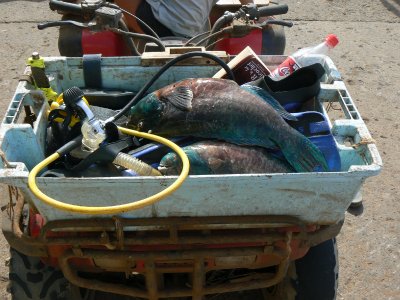 I was lucky there were a lot of people around so I could hitch a ride back up the hill of difficulty. The name does credit to the climb up from the landing up to the Edge, because if you are going to walk it, you better take along enough water. It is a climb up to 70 metres but really steep. Just when you are about to leave a warning sign is placed warning you for speed cameras. No worries, they are not around it was a joke from someone and along with the sigh they sticked an old camera up there. 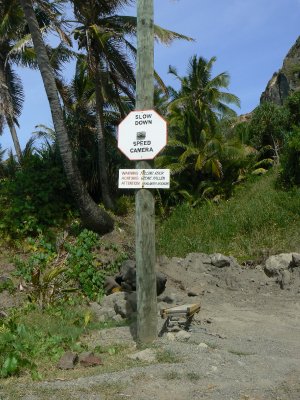 In the evening around 18.30 hours I walked down to Christian’s café. Every Friday there is a dinner with a choice of three courses. This evening it was a choice of roast beef, sausages or fish. For 16 New Zealand dollars (about $9 US) you get a very big full plate of good food. Before and after the dinner people sit around and talk and have a few drinks.
It is open on a Friday evening, because on Saturday it is Sabbath and the only day of from work here on Pitcairn. Sabbath is the official day here, because the official church on Pitcairn is Seventh Day Adventists.
After the dinner some people were invited to come up to Paul and Sue’s place for an evening of Darts and drinks. My cousin and me where welcome too and we had a wonderful time, playing Darts, talking and exchanging jokes. Paul and Sue serve Whale’s tooth shots, these are liquors served in a Whales tooth (from a sperm whale). 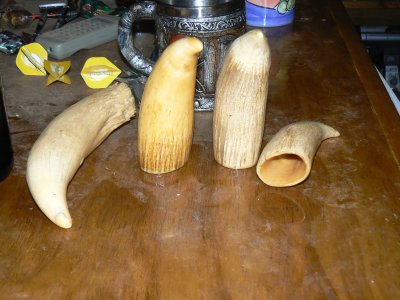 The teeth have been hollowed out and hold about the same amount of liquor as a normal shot glass. But since you are holding a big ivory tooth the drinks taste so much better. 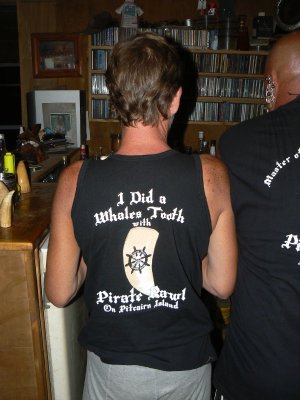 Around three in the morning it was about time to go back home and turn in for a good night sleep.
Yesterday on Sabbath I went snorkelling in the morning, I was supposed to go diving, but after the party Friday evening I rather not took the risk. The water around the island is very clear again, and when I jumped in I saw the bottom. It looked about a few metres deep, but the two people who went diving said the bottom was on 18 metres, this just shows you how clear the water around the island is.
In the afternoon we went up to highest point to have a family barbeque.

All the family of the people I am staying at came up and brought lots of very good and wonderful tasting food. Everybody brought chairs along and we had a few good laughs of the state our “Luxury yacht” Bounty Bay is in. 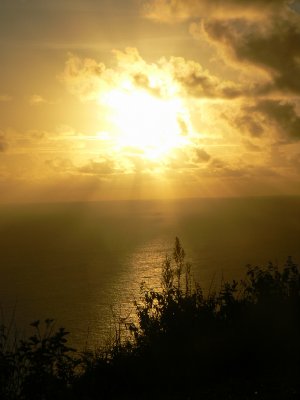 At sundown we all packed up headed back down again, and I turned in for the night because I had some catching up sleep to do.