Getting to know the island

After the party last night I had to wake somewhat early because the Post Office was open. It is open three mornings a week and beside the normal stamps you buy for sending your cards, they have a beautiful collection of Pitcairn stamps. So I bought some nice looking FDC’s (First Day Covers) of among the other things a whole collection of the Bounty.
After that I put the cards in the mail and they will be picked up by the supply ship 2nd of April. The ship takes it back to Tahiti and from there on it is send to Auckland in New Zealand. From here it gets send all around the world, to whatever country you address it to, and all of that service for just one New Zealand dollar, where else around the world can you get so much service for such a small amount of money? So do not be alarmed if you send postcards from Pitcairn and they are not there when you come home, just remember that Pitcairn is dependent on supply ships for many things and they only arrive here every three months. 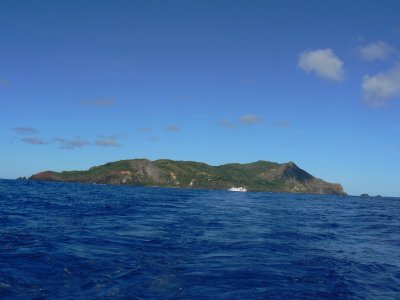 I heard another strange thing, at least it is really strange to me, the New Zealand or British authorities decided that there is no more money for a doctor on the island, so soon they will be without one. But the strangest part is there is money for a Social worker and New Zealand policemen. It seems to me a doctor is much more useful than the other people, because they are so remote that when something bad happens it can take a while before you are in a hospital.
This afternoon the daughter of my host took us up to the trail of Garnets point. 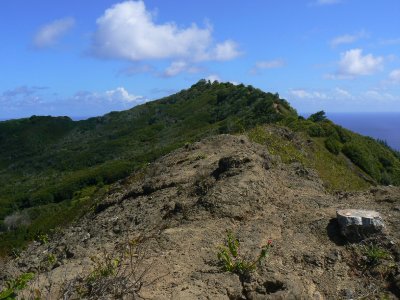 We walked over a small ridge to the end of the trail and had an amazing overview of Adamstown and the rugged cliffs below. I would not recommend this trail if you are afraid of heights, because on both sides of the trail, you have some pretty steep drop offs. But the view is absolutely worth the walk. 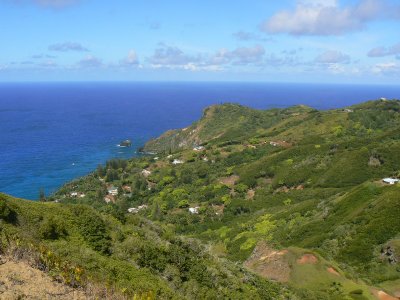 Around 16.30 we went to the town square, because every fortnight (2 weeks) people gather here and trade and sell the things they have been making at home. There was a lot of good food around and it looked to me more people had the same idea because there was some trading done. 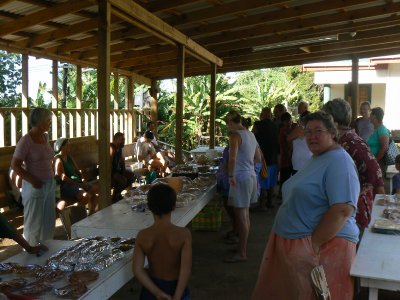 The nice part was that Father Jay first made a prayer and after that the trading started and next to the trading there was also a kind of raffle. There were two sealed boxes and a huge watermelon, on a board you could write your name down and guess the weight of each of the three items. I was picked as one of the winners apparently I had a good sense of how heavy the watermelon was and so I won a 5,3 kilo heavy watermelon. The only thing about me winning it is that I have to supply an item for the next raffle in two weeks.
We have had warm weather everyday since we arrive, but I heard that it has not rained on Pitcairn for two months now. So I hope as soon as we leave the people here can have the much-desired rain
Well I have until Sunday to find something; because that is the day the skipper is planning on returning to Mangareva via Temoe atoll.
Even tough by than we have been here for 5 nights and 6 days I still think it is quick, because the island is very beautiful and the people here are very friendly, so what are you waiting for come over and visit. www.visitpitcairn.pn