Off to Pitcairn Island

At 3.30 in the morning just when we where about to hoist anchor and steam to Pitcairn an oil line sprung and the whole aft deck was splattered with oil. Our trusted Jack had to work for 5 hours to get the problem fixed. But finally he did and we where able to leave at 9 in the morning. It will take up to 20 hours to cover the 120 km (75 miles) from Oeno to Pitcairn 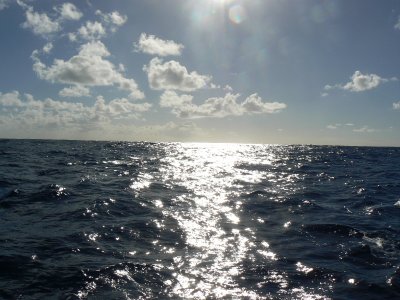 When the Pitcairn people go to Oeno, like us they use GPS to navigate. They take 2 longboats fill it with everything they need including 20 litre barrels of fresh water and they make the trip in 9 hour. You do the math!
After a few hours problem number …. (I lost track) arose. Due to the oil line breaking there was now some diesel fuel in the oil lines. But there is nothing Jack can do at open sea so we headed on.
Finally at 2.30 in the morning we reached Pitcairn Island.