After 60 hours at sea we finally reached our first Pitcairn Island: Oeno. 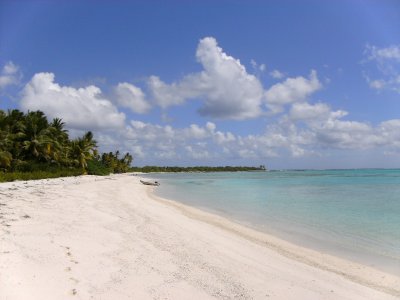 It is a miracle we arrived at all, but more about that later on.
Rock ‘n Roll is not a dance it is a nautical term! You never danced like this when you have not been to the South Pacific. For almost 60 hours our boat was rocking and rolling on the waves and we danced along with it. And this is called calm weather, wirh winds up to 40 km (25 mph). But we made it.
Now for the problem, we can't land at Oeno because the equipment on board is not working. The compressor is out of order and so diving is no longer an option. Our chief engineer is doing his utmost to get the thing working. For floating the dinghy however an electrical compressor was at hand.
Because the state of the machinery on board is not good, every 6 hours 1 of the engines has to be switched of and checked to diminish the risk of overheating. For this reason the cooling system is checked for an air lock and if it is there the system has to be refilled.
Every 18 hours both engines have to be stopped and our miracle workere Jack has to do his magic for 2 hours to get the motors up and running again.
Last night the crew was even hosing the engine room because apparently some water had come in or the cooling system sprung a leak, they wouldn’t say.
The skipper considered turning back, brcause of the faulty engine but our wonder mecanic fixed it and so we went on.
I am sure we are no longer going to Ducie and even if the skipper says he will go I will not come with.
But on the positive side, we caught a Red Coral Trout and so we have fresh fish for dinner. 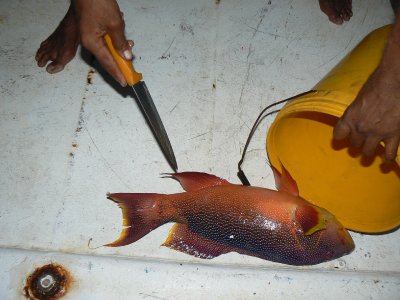