Flipper where are't though?

Today we went to Gabal el Rosas, a really beautiful reef near our Brayka Bay Reef hotel in Marsa Alam. The first drop off is until 20 meters. And there are some pinnacles at 30 meters, but the long reef at 20 meters is absolutely beautiful so you don’t need to waist your air and go deeper.
We went in a zodiac to the drop off point and that was an adventure in itself. The red sea is still very stormy and we had waves up to two meters. But the reef was worth the circus ride. 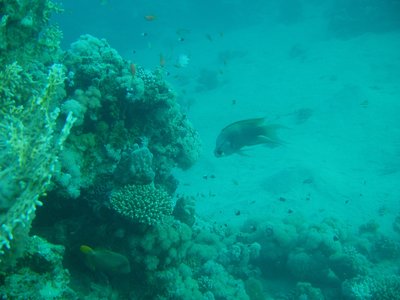 Yesterday we went on the sheiks yacht to Dolphin house reef. The Red sea was even more rocky then today and we had waves up to 4 meters. Though we looked very hard there were no dolphins to be found. We made two dives. One on the east point and one on the west point of the reef. But Flipper and his friends never showed up. Guess a Dolphin isn’t a friend of man after all? Or maybe our group wasn’t human enough. Well it didn’t matter because the reef is wonderful with lots to see. So go there anyway if you’re ever in the neighborhood. It’s also good for snorkeling.
On the way back the boat had it rough and it was rocking and rolling, but not the people. Some people went sick, but well shit happens.