Why it’s nicer to visit a local Nadam festival

Today after a very long drive, 11 hours for 300 kilometres, we finally reached Khuvsgul lake in the north of Mongolia at the border with Russia.

On the way there we made a stop at Moron city to visit the local Nadam festival. Again we saw the 5-year old stallions pass the finish line after their 26 km race and even a horse which had obviously lost it’s jockey, but ran anyway in a horde like manner with the other horses.
We looked at the wrestlers from the jury box and especially the women in our group were very happy because we were close enough to touch these impressive men. 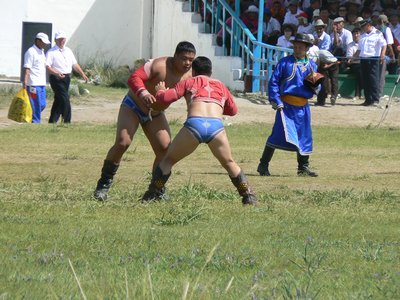 After all this excitement we looked at the ankle bow archers and we came to the conclusion that it’s better to visit this Nadam than the one in Ulaanbataar, because here you can get so close to the athletes that you can literally touch them, which is impossible at the national Nadam in the capital.
After many days of very tiring drives we had a two day stop at the Khuvsgul lake and saw some reindeer and had a nice two hour long horse drive along the shores of the lake. Some of the brave ones among us had a dip in the very cold lake, which couldn’t have been more than 10 to 13 degrees Celsius.