How to get pregnant in Mongolia

Today we left camp to head for the ancient city of Kharakhorum.
Once there we first drove up a hill, next to the city, to hear a story about an enormous penis and vagina.
These were made on the order of the head of the local monastery, because his young monks where only interested in the local women and not in their prayers. Once the priest had performed many mantras and sutras at these reproductive symbols the young monks returned to their prayers again and no longer looked at the local women. At least that is what the legend says.
But as the story goes up to this day women who want to get pregnant, but have problems getting, come in the early morning to these symbols and ride the big penis, because they believe it will bless them. 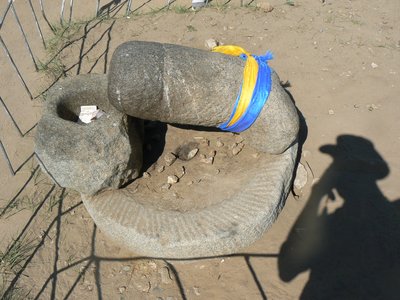 We then visited the monastery in the former capital, founded by Chinggis Khan. The monastery was largely destroyed during the communist purge under the Soviet influence of Mongolia. A large part of the monastery has been restored since 1996 and since then there are again Buddhist monks living and studying in the monastery.
On the earlier mentioned hill and outside the monastery there are two huge statues of turtles, which make no sense what so ever because Mongolia has no seas.
The ruins of the former Chinggis Khan capital surround the statue near the monastery. As a big contrast in the back of these ruins and the statue stands a very ugly polluting asphalt factory. Which is a shame off course but can deliver a nice photograph if you stand on the other side of the monastery. From that side it looks like the monastery is on fire because of the black smoke from the factory.
After our visit we headed off north through a UNESCO protected nature reserve and saw our first Yaks. Little did we know that in the coming days we would see more and more of them, together with Yak and cow cross breads, named Hannocks.
It became obvious we where heading north because the surrounding plains and mountain ranges became greener and greener and the nights got colder.
Mongolia, what a beautiful country.