Why it’s never a good idea to travel on this day.

Yesterday we had a long day drive, 300 km, to reach our first ger camp. These 300 kilometres take about 9 hours going south from Ulaanbataar.
Today we had another long drive to our primitive campsite in the middle off the Gobi, but we made a lovely stop at a now almost dry lake. The lake had shrunk by a lack of rain and of a nearby mining site.
We had a big rain shower on the way to our campsite and were lucky enough to be just a few metres ahead of a mud flood up in a mountain range we crossed. The flood was building up and if we had reached the crossing 5 minutes later we would not have been able to cross the range and would be forced to turn back. We drove through the first waves of the flood and got the hell out of there because there was lots more coming down the mountain.
Other reasons why you should not travel on Friday the 13th: In the morning our car wouldn’t start and in the afternoon we had a blow out of a rear tire.
Almost enough to make you start believe all this nonsense about Friday the 13th. 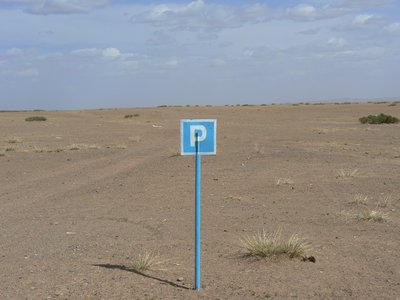