We saw the archers and wrestlers coming into the stadium in their many coloured traditional outfits. Suddenly a loud eruption of enthusiasm from the local people, finally the very important traditional banners are brought in by proud Mongolian horsemen in parade uniforms.
I’m overwhelmed by the power they radiate and the influence their appearance has on the local people. As if Chinggis Khan himself is marching by just three feet away from you. 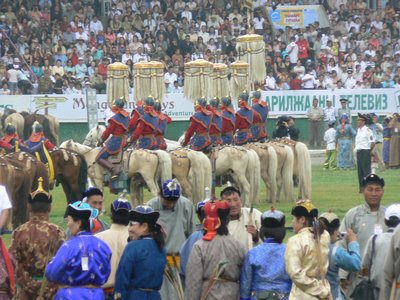 After a lovely vegan menu, yes really, we leave Ulaanbataar in a gigantic traffic jam. It looks like all the 55.000 cars from the city decided to leave the city at the same time and all choose the same two lane street out of the city. What was a two-lane two-direction street quickly becomes a four-lane one-direction street, because everyone wants to see the finish of the race between the 5-year old stallions. The odd car that goes in the opposite direction has stopped trying to reach Ulaanbataar and the people are sitting next to it, looking at this big migration.
This 26 km race is so important because for the stallions it decides if they stay a stallion or become just a horse.
After a lovely meal in a French restaurant, which is owned by the typical arrogant Frenchman, we turned in for the night.