My last tour in Salalah took me to the Empty Quarter, which wasn’t as empty as the name indicates. There where a lot of Alfalfa farms around and the crops grew very well, off course a lot of intensive irrigation is used to grow the Alfalfa. The thing that struck me most about is that when you looked at the ground you couldn’t believe anything would grow on this bare rocky sand like ground, but it does.
On our drive to the Empty Quarter the temperature rose from a agreeable 27 degrees Celsius to a scorching 41 one in just a few kilometers. You start out at sea level in Salalah and drive up the mountain range in the north, trough the green and when you reach about 900 meters above sea level you go trough some valleys where you see the green slopes gradually change to bare slopes with absolutely nothing growing on them. 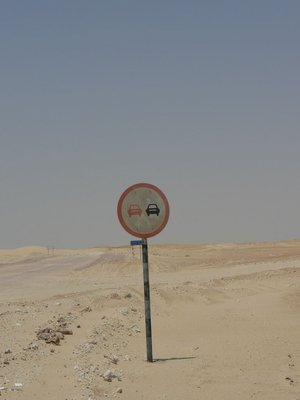 In the Empty Quarter we first brought a visit to Ubar, the lost city. This city was discovered on a satellite photo and subsequently dug up from the sands. It’s believed to be the lost Bedouin city which played a large part in the frankincense trade, as it was the last, or first depending on the direction your going off course, oasis in a other wise bare desert. It is now on the UNESCO world heritage list but there is not much to see; only a few pair of rocks piled on top of each other indicates what might have been some houses or other buildings in the past.
We ended the tour with some dune driving and then it was time to go back to Salalah, my driver took a turn off the main road and we descended from the mountain range on a secondary road, I thought I ended up in France or the Black Forest, it was so incredibly green and luscious you wouldn’t have believed to be in the Middle East.