Monday the 11th of September, yes 9/11, I visited the west of Salalah. Our first stop was at a fishing village called Taqah, it must have been an important or strategic town in the past because it was surrounded by four watchtowers/forts and a real fort at the centre of town. We proceeded further west to visit the queen of Sheba, well that is, the ruined city of Samhuram at Khor Rori creek, which is said to have been a residence of the queen of Sheba.
After we paid our respects to her majesty we went on to Mirbat, the ancient capital of the Dhofar region. In the 9th century this town was famous for its trade in frankincense, horses and slaves. Now it looks like a sleepy little fishing town.
On the way back to Salalah I got my first up-close view of how green the region is after the Monsoon season. Near Tarqah we turned toward the mountains and drove for about 8 kilometers over some steep and sharply curved roads and ended up at a valley. What you see is unbelievable if you have you’re average idea of how the Middle East looks like. You get the idea that you’re in a valley in the Alps, but you can’t rime it because the trees and flowers are completely wrong for the Alps. After the Monsoon there is an abundance of trees, flowers and water. 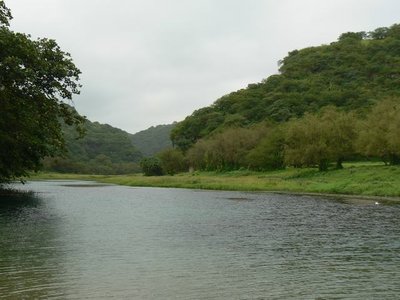 The Arab people love it and during the monsoon season itself they drive and fly up here in hordes, a room is hardly available then in Salalah. Since I arrived one week after the schools have started I had no problem getting a room, but don’t think it will be that easy from June till August. There where still some Arab tourists left, I saw a couple form Kuwait and one from Dubai, both in there own car and some other people enjoying a picnic near the river. Well it makes a lot of sense when you think of it, that people from the Middle east come hear during the rainy season to enjoy the coolness and have a picnic in the rain. After all we western’s fly off to the sun to escape the rain because we have so much of it, so why not the other way around if you have sun and heat all year.

That is Oman, Salalah, in specific a place called Darbat.

Hi.
You are right , Salalah is one of the most tourist places attract mostly the tourist coming from neighbouring countries to Oman as Kuwait , Saudi Arabia and UAE.

It's really hard to find available hotel room during Summer Season. I know that this because I am a travel agent in Kuwait.